Copy to clipboard
Track map for the British Grand Prix revealed. Watch the GoPro fly through here. First ever World Supercross Grand Prix set for this weekend, with 40 of the world’s best supercross riders ready to do battle at Principality Stadium, Cardiff, Wales,on on Saturday 8 October. 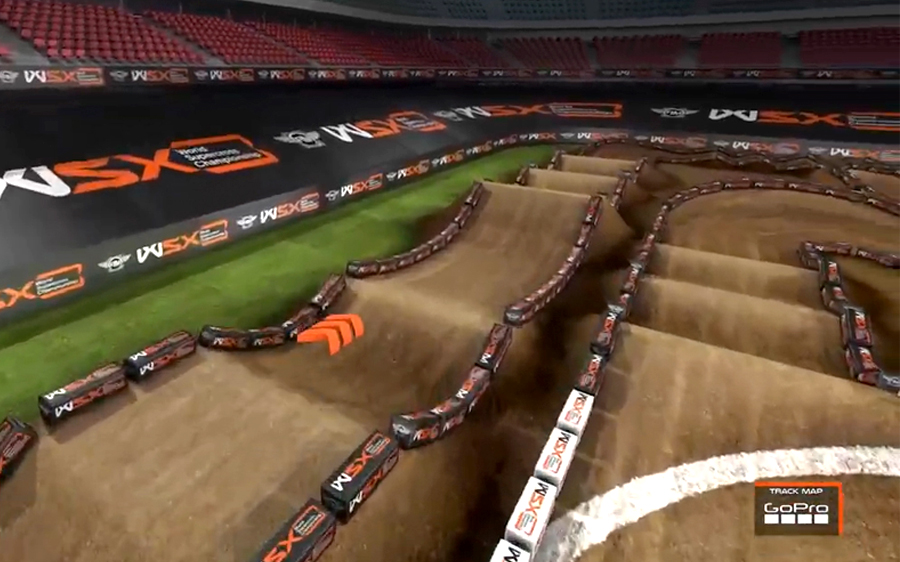 (October 3, 2022) – The track map for the 2022 FIM World Supercross Championship season-opener has been revealed, with a GoPro fly through showing the technical nature of the track facing the teams and riders this weekend.

The vision of revered track designers Dream Traxx, the layout builds on conventional supercross models but innovates and enhances to bring high quality, competitive racing for the fans, while also ensuring there is an emphasis on rider safety. The goal; the enable riders to go faster, harder, and safer than they have been before.

The reveal of this weekend’s track layout comes as the stage is set for the first ever World Supercross Grand Prix, which will see Cardiff’s Principality Stadium descended on by 40 of the world’s best supercross riders this Saturday, ready to go ‘bar-to-’bar in the fight for victory.

The British Grand Prix will give UK fans the chance to see the sport’s biggest names in action, with the likes of former supercross world champion Eli Tomac, twice-champion and supercross stalwart Chad Reed, and AMA motocross champion and supercross superstar Ken Roczen lining up alongside a plethora of European talent – such as French ace and former motocross world champion Jordi Tixier and Italian Angelo Pellegrini – while Brits Max Anstie and Dean Wilson will give the home crowd someone to cheer for.

Adding to the spectacle will be physics-defying freestyle motocross shows, awe-inspiring pyrotechnics, and a live performance from music megastar AJ Tracey, while fans can get closer to their racing heroes with pit walks and rider signing sessions.

The addition of a superpole session for the WSX (450cc) class will see 10 riders – the top five finishers from the two heat races – set off one at a time in a time trial format, with lap times determining gate picks for the main events.

For both the WSX and SX2 (250cc) classes, the main events are also overhauled. For the WSX class, the typical 20-minute races have been replaced with two eight-minute races and a 12-minute race, with just five minutes in between. The result is an increase in the overall level of intensity and unpredictability, and more emphasis on the importance of a good start. The SX2 class will get two six-minute and one 10-minute race.

“The track design from the guys at Dream Traxx looks incredible and I’m sure it’s going to deliver a night of close, intense and competitive action. We’re all set with the biggest teams and the best riders ready to put on an amazing racing spectacle for the UK fans … an unforgettable night out.”

Adam Bailey, managing director of motorsport for SX Global, the Australian firm spearheading the new World Supercross Championship, said, “After all the hype, all the build up, race week is finally here and we couldn’t be more excited to get going and finally take the sport of supercross to global audiences as part of a world championship. The track design from the guys at Dream Traxx looks incredible and I’m sure it’s going to deliver a night of close, intense, and competitive action. We’re all set with the biggest teams and the best riders ready to put on an amazing racing spectacle for the UK fans, while live music, stunt shows, and fireworks will make it an unforgettable night out. We can’t wait to get started.”

Tickets for the British Grand Prix, which takes place on Saturday 8 October, can be purchased here, with gates opening at 15:30 while track action gets underway from 17:30.