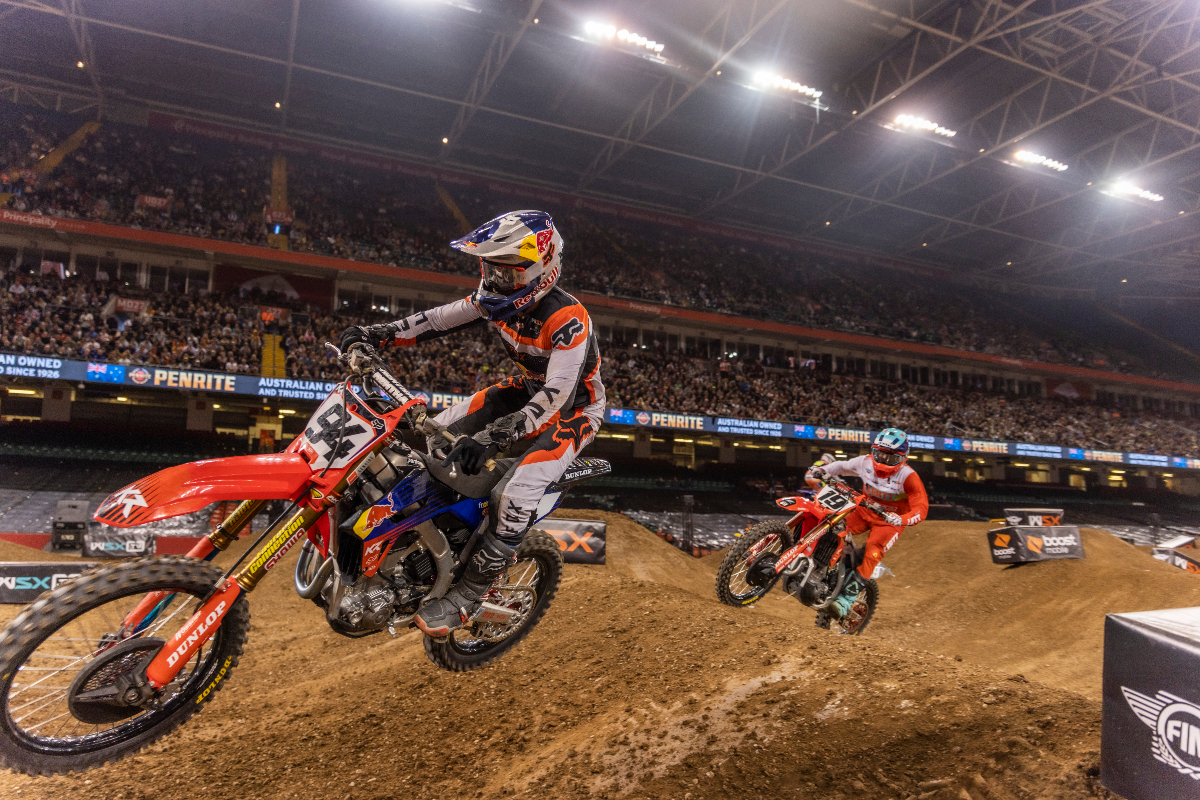 AUSTRALIA (October 10, 2022) – The FIM World Supercross Championship descends into Marvel Stadium in Melbourne, Australia on October 22nd for the culmination of its pilot season with the Australian Grand Prix. History will be made as four FIM World Champions will be crowned, with the WSX, SX2, Team, and Manufacturer championships all up for grabs.

The WSX Class Championship will be headlined by a battle between Germany’s iconic Honda Genuine rider, Ken Roczen, and hard-charging American, Vince Friese, riding for MotoConcepts Honda. Both riders are in prime position to take home the title of FIM World Champion with several other 450 riders in the mix looking to spoil Roczen and Friese’s chances. Round one wildcard, Eli Tomac – who dominated Cardiff sweeping all three main event heats – will not be heading to Australia, leaving the Championship fight between Roczen and Friese – with just three points separating the two riders.

Within striking distance of the WSX Championship is is Honda’s Justin Brayton, just eight points off the lead, and American CDR Yamaha rider Josh Hill – who has won rounds of the Australian Supercross Championship in the past – sitting 17 points out heading into Melbourne.

The Melbourne event had looked to be a dramatic homecoming for Chad Reed after coming out of retirement at the age of 40 for this year’s pilot season. Unfortunately for Reed, the British Grand Prix proved catastrophic when a fuel pump failure on his MDK Motorsport KTM threw him off-track during his heat race, resulting in a dislocated shoulder, broken hand, and broken ribs. Having already returned to Australia, Reed underwent surgery this week and is expected to make a full recovery.

In addition to Reed, MDK Motorsports rider Josh Grant was injured in Cardiff and will also be out for the final round in Melbourne. As a result of the two injuries, Australian replacement riders Joel Wightman and Jackson Richardson will race for MDK Motorsports in Melbourne.

Although Australian legend Chad Reed is out of action for this weekend’s event, fellow countryman and Aaron Tanti has a chance to make history. The Craig Dack Racing rider and local favorite comes into Melbourne just eight points behind SX2 points leader, Shane McElrath, riding for Rick Ware Racing.  Tanti’s local storyline aside, the SX2 Championship battle will be intense with Americans Chris Blose and Mitchell Oldenberg only one and two points back of McElrath respectively.

The FIM World Supercross Championship pits 10 licensed teams from Australia, America, Italy, and France against each other, including NASCAR and IndyCar team owner, Rick Ware and two Australian teams – Honda Genuine and Craig Dack Racing. Each team fields two riders in both the WSX and SX2 classes.

Joining the 40 licensed team riders are two local wildcards in each category, with Melbourne’s WSX additions being led by South Australian KTM veteran, Brett Metcalfe. The multiple-time Australian Champion will compete against the best in the world from America, Germany, France, Italy, and Sweden. Joining him as a Melbourne wildcard is 26-year-old Aussie young gun, Kyle Webster. The SX2 Australian Grand Prix wildcards, Rhys Budd and Nathan Crawford, are a duo that has been at the top of their game in Australian motocross and Supercross competition.

The weekend’s high-flying supercross and freestyle motocross action will be supported by leading Australian recording artists – Peking Duk (Friday) and Bliss N Eso (Saturday). Fans will get the chance to meet their heroes during autograph sessions on Friday from 4 p.m.-5 p.m. and Saturday from 12 p.m.-1 p.m.

Tickets are available now at Ticketmaster.com and for more information on the FIM World Supercross Championship, visit www.wsxchampionship.com or follow the WSX Championship on Facebook and Instagram.