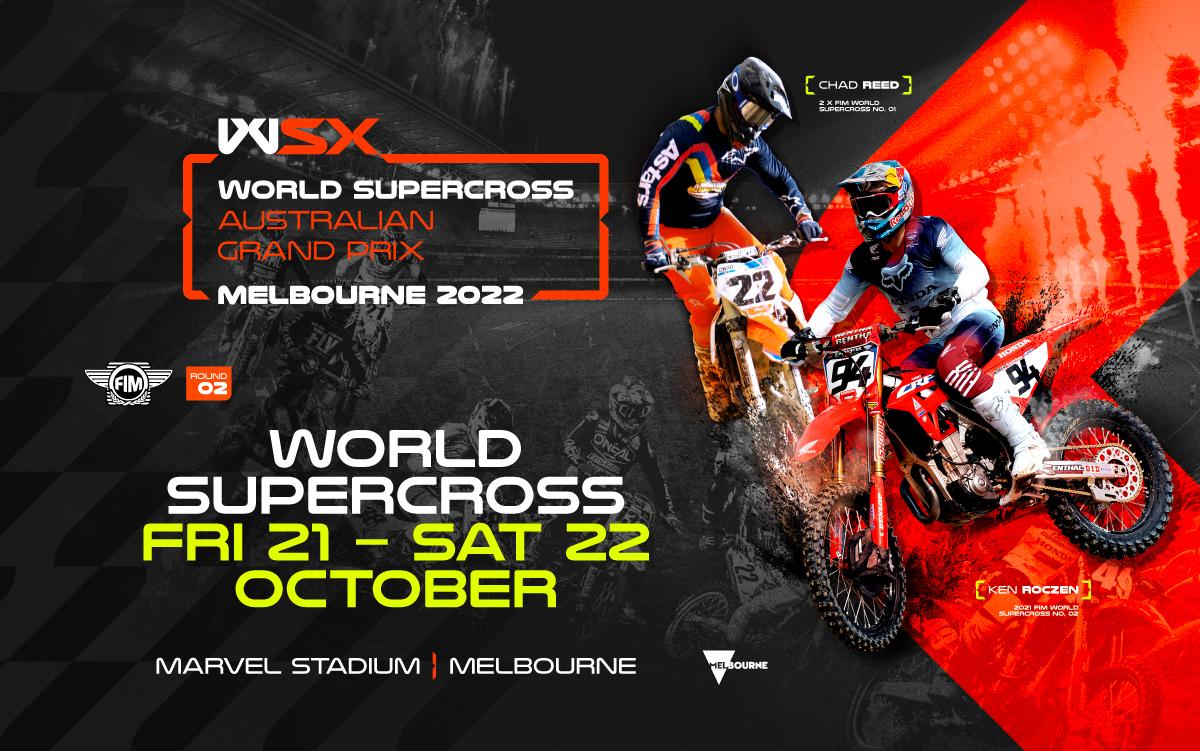 AUSTRALIA (July 20, 2022) – Melbourne has today been announced as the Australian city to secure the exclusive rights to host a round of the FIM World Supercross Championship in 2022, 2023 and 2024. This year, the WSX Australian Grand Prix, will transform Marvel Stadium into the ultimate dirt battlefield for two days of unmissable action on Friday 21 and Saturday 22 October 2022.

The Australian Champion will join a star-studded field of world-class riders including current World number two, German, Ken Roczen, World number ten Justin Brayton, Vince Friese, Cole Seely and more from the USA, with the UK’s best Dean Wilson (Scotland) and Max Anstie (Britain), going head-to-head with the remaining field made up of riders from France, Italy, Brazil and more.

Supporting the World Championship action, Australia’s best domestic competitors will contest the opening round of the FOX Australian Supercross Championship, on Friday night. The best Australian riders will not only compete for the domestic championship honours, they have the opportunity for the first time to compete on the world stage in the WSX Championship racing on Saturday night as a Wildcard.

SX Global, is the Australian company spearheading the FIM sanctioned World Supercross Championship. SX Global’s President, Tony Cochrane, said “SX Global is thrilled that Melbourne has secured a round of the prestigious championship for the people of Victoria and Australasian fans for the next 3 years until 2024. The future of supercross is on a global stage and for Melbourne to host a round the championship adds to its impressive portfolio of major sporting events. We extend our gratitude to The Hon Minister Dimopoulos and the Visit Victoria team for recognising the vast potential and working with us to bring it to life.”

Tony Cochrane added, “With Australia’s loyal and passionate Supercross fanbase, the exclusive WSX Australian Grand Prix will not only attract fans to Marvel Stadium from every corner of our country, but the globe, all eager to watch the best riders battle it out for World Supercross Championship glory.  It’s also an opportunity to showcase what Melbourne has to offer, to our ever-growing international supercross audience across North America, Europe and Asia.”

“The addition of Australia’s own supercross legend and 2-time World Champion Chad Reed and the world’s best up and coming supercross athletes to the ten team – 40 world class rider field answers the call from Australian fans.” said Adam Bailey, SX Global’s Managing Director – Motorsport. “The 2022 FIM World Supercross Australian Grand Prix, will be a historic occasion for all supercross fans and an incredible weekend of racing and live entertainment. We cannot wait to see a packed Marvel Stadium in October.”

Chad Reed commented “Opportunities like WSX don’t come along every day, I’ve seen plenty during my career, but this is super cool and something I had to be involved in,” said Reed. “I’m excited to be here today from the US to help launch the Melbourne round and hopefully highlight to everyone around the world how epic this championship is going to be. The WSX Championship going global is the biggest thing to happen to supercross in its history.

“It’s the beginning of something special that will expand supercross on a global level and give riders different/new opportunities at an international and local level. It opens a lot of doors for everyone,” said Reed. “I haven’t raced in Melbourne since 2019, so can’t wait to get back here in October and go up against the best current riders in the world. It’s going to be one hell of a 2022 championship.”

” … can’t wait to get back here in October and go up against the best current riders in the world. It’s going to be one hell of a 2022 championship.”

On Friday 21 and Saturday 22 October Marvel Stadium will be transformed into the ultimate dirt bike battlefield for two epic nights of unmissable action and intense competition racing, where 10 teams and 40 of the best riders from across the globe will do battle for over US$250,000, equivalent to over A$360,000, in cash and international supremacy. Both nights also feature live music entertainment, freestyle motocross stunts, pyrotechnics, and more.